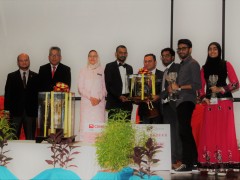 The Royal Debate was initiated by the International Islamic University Malaysia in 1995 to encourage varsity students to improve their communication skills and critical thinking. Since then, the tournament has been hosted by various public universities with the support of the Ministry of Education through Majlis Debat Universiti Malaysia (MADUM). This year the Grand Final for the English Category saw an intense battle between the IIUM and University of Malaya (UM) on the motion “that all Malaysians, regardless of age, deserve the right to vote”. IIUM team proposed the motion and argued that teens are now well-informed and should be given a bigger stake in how the country is run seeing that the decision of the country’s leadership now will affect the future of our teens. IIUM team won a challenge trophy and RM3000 cash prize. IIUM Debater Ms. Shahrulbanun binti Mohd Arif Sabri, 23, a student of Ahmad Ibrahim Kulliyyah of Laws, received both the Overall Best Speaker Award and the Grand Final Best Speaker Award. Other members of the team were Shitab Daiyan Akash, 24, a student of Faculty of Economics and Management Sciences, Ahmad Syarif Bin Ahamd Fakhry, 22, a student of the Faculty of Engineering, and Naufal Ahmed, 24, a student of Ahmad Ibrahim Kulliyyah of Laws.

IIUM has a strong focus on training students for communication and critical thinking skills and command of English language through debating activities. This focus has paid off as the University has won numerous national and international recognition. For the University’ performance in national and international competition, MADUM also awarded IIUM the Best Institution in Debate Awards for the year 2016-2017 in both Malay and English categories.