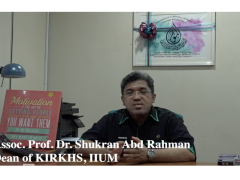 This video is the fourth of a series published by the Kulliyyah of Revealed Knowledge and Human Sciences (KIRKHS) within its project “KIRKHS Downroad to 2030: Creating Preferable Future".

The speakers in the series are the futurists represented by IIUM leaders, founders and intellectuals, expressing insightful visions toward IIUM future.

In this video, Associate Professor Dr. Shukran Abd Rahman, the Dean of Kulliyyah of Islamic Revealed Knowledge and Human Sciences, launches the project of KIRKHS Downroad to 2030 and beyond.

WISH ALL OF YOU 'HAPPY EIDUL FITRI, MAAF ZAHIR & BATIN'

Tips of the Month - FAQ I Am Interested to Join IIUM