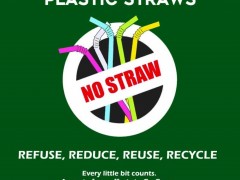 International Islamic University Malaysia (IIUM) is starting to shift towards greener alternatives in saving the earth and future.  In line with the government’s approach on single-use plastics ban starting July 1, 2019 and Ministry of Energy, Science, Technology, Environment & Climate Change (MESTECC)’s Roadmap Towards Zero Single-use Plastics 2018-2030 policy, IIUM also had started the single-use plastics ban campaign namely Zero Single-Use Plastic Campaign that was launched on 14 February 2019, officiated by IIUM Rector, Prof. Emeritus Tan Sri Dato' Dzulkifli Abdul Razak. Throughout the campaign, one of the initiatives in abolishing the dependency of plastic usage including straws and food containers among IIUM community has been introduced which is the 4Rs (Refuse, Reduce, Reuse and Recycle).

Answering to the global cause that has been scrutinizing the earth for years, immediate action is needed in order to limit and reduce the irreversible climate change. One of the solutions is by maintaining or reducing carbon emissions which was agreed by 197 countries in the world, according to UN (2019). If carbon emissions are not reduced, the irreversible temperature will only keep rising and lead to various other global issues. Hence, one of the steps taken is by banning and reducing plastic production and usage.

Why plastic out of many things in this world? Since it is produced from the oil industry, it contributes to the emission of more carbon gasses into the air. Other than that, it also leads to pollution. According to Surfers Against Sewage (2019), in 2016, a global population of more than 7 billion people produced over 320 million tons of plastic. This is set to double by 2034. Every day, approximately 8 million pieces of plastic pollution find their way into the oceans. Furthermore, It is because plastic is the easier way to cater to the problem arise and also the simplest thing to do in banning campaign. This is also due to the huge number of wastage where most of it comes from the plastics itself and since Malaysia ranked 8th place in worst plastic waste management in the world, this says a lot about our country. Hence, we have to do something and start making changes if we want a better home and a better future for generations to come.

IIUM also has started the plastic bottle and single-use plastic banning campaign earlier this year. For starter, most of the kiosks, shops and food outlets in IIUM will cut out the selling of mineral water plastic bottle. Furthermore, as mentioned by Asst. Prof. Dr. Azlin Suhaida Azmi, a member of IIUM Go Green Committee, in one of her discussions, numbers of water dispenser will be installed by IIUM Residential and Services Department (RSD) all around the campus, as well as drinking water vending machine like Dr. Sukida for instance. A few water dispensers have already been installed but since the implementation is still new, RSD is still in the process of adding more water dispenser and drinking water vending machine around the campus and mahallah. Moreover, Daya Bersih with help from the Development Division will also be installing free water dispenser for staff and students soon. Dr. Azlin added that the obsolete watercooler will be removed and replaced with the new water dispenser with a little bit more of alkaline water compared to the previous one. To sum up, everyone needs to take this matter seriously and must have the effort to make a difference. Small change is still a change and that is what counted. We must unite and work together with the community, the university administration, with everyone in answering the global call. Take action now. This is a global issue that needs global solution to resolve it.

Let's Pay Zakat Before the end of the year 2020