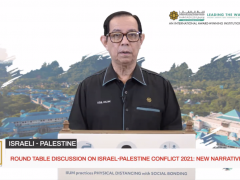 Gombak, 14 June 2021. Professor Emeritus Tan Sri Dato’ Dzulkifli Abdul Razak, the Rector of the International Islamic University Malaysia calls for efforts in resolving the Israeli-Palestinian conflict that could achieve justice to all parties.

The Rector speaks on the importance of finding a fair and just solution across barriers of religion, race and territories at the Round Table Discussion on Israeli-Palestine Conflict 2021: New Narratives. The event is organised by the International Law and Maritime Affairs Unit, Ahmad Ibrahim Kulliyyah of Laws, IIUM.

Professor Farid Sufian Shuaib, Dean of Ahmad Ibrahim Kulliyyah of Laws in his remarks thanks the Malaysian Red Crescent Society and the Department of International Law, the Faculty of Law of Universitas Gadjah Mada, Indonesia as partners in organising the Round Table Discussion.

He comments that the Nakba which began in 1947 continue until today with the continuous force displacement of Palestinians from their home. The belligerent occupation of Palestine is also not merely a chapter in history but a living story. The expansion of illegal settlement in the West Bank continues together with the siege and blockade of the Gaza Strip. These living realities could not be negated and deflected any longer with the works of the youth, living under the occupation sharing through first-hand account how children, adolescents and the elderly barely eke out a living under the violent occupation of an apartheid regime.

The discussion considers the importance of legal actions through the International Criminal Court under the rule-based world and the mass movement of Boycott, Divestment, Sanctions (BDS) in highlighting the violent and unceasing nature of the continuous occupation of Palestine learning from the past struggle against similarly apartheid South African regime.