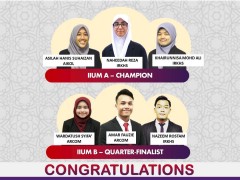 THE ARABIC DEBATE TEAMS ARE STRIKE BACK!!

IIUM World Debate and Oratory Centre (IWON) would like to congratulate the members of the Arabic debate team for emerging the Champions at the International Speech and Debate Competition 2020 (ISDC 2020) organised by Universiti Sains Islam Malaysia (USIM). In the Grand Final held on 8th November 2020, IIUM Team A debated against USIM Team A. The members of the Champion teams were: