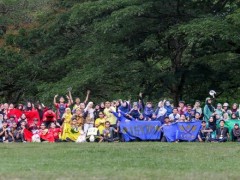 GOMBAK - - The third annual event of “Student Facilitating Front (STUFF) Sports Day 2019 (SSD)” held at Mahallah Ali field, IIUM on Saturday (16 November), not only brought its members together in efforts to get to know each other better, but also to promote ukhuwah among members.

The event organised by STUFF IIUM saw more than 100 members participating in the event that brought joy to every member. Not only that, the participation of the alumni in this event had made the event significantly merrier loaded with supportive vibes.

Members expressed satisfaction that it was such a fruitful team building event led by the programme manager, Nur Fatihah binti Mohammad Latip.

One of the participants, Nur Alia Izzati said, “Even though most of the members are younger than me, but I learnt a lot from them on how they work together as a team and never complain on anything,’ she added,

“This event has helped to strengthen the ukhuwah among us.”

She added, “Furthermore, the committee had prepared several games for the event which allowed members to interact with one another and build cordial relationship. Thankfully, all members had a pleasant time.”

“I’m truly thankful and happy for those who spent their time to come for the event. Actually, this is my last SSD for this year as I will graduate soon and I put all my energy during this event,” said the president of STUFF IIUM 2019, Ahmad Ameer Wafiq bin Nordin.

Volunteer on the Garden