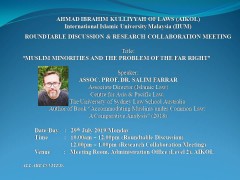 Topic: "Muslim Minorities and the Problem of the Far Right"

The roundtable discussion was organized by CANGGIH Research Cluster under the leadership of Prof Dr. Nik Ahmad Kamal Nik Mahmood on 29th July 2019. The title of the discussion was “ Muslim Minorities and the Problem of Far-Right”. The speaker was Assoc. Prof. Dr. Salim Ali Farrar who is the Associate Director, Centre for  Asia and Pacific Law from the University of Sydney Law School. The discussion was moderated by Assoc. Prof. Dr. Mohsin Hingun from the Civil Law Department, AIKOL. The discussion began at 10 am and ended at 12.15 pm. The program was attended by 26 participants, which consist of AIKOL academic staff, AIKOL postgraduate students, staff and postgraduate students from the Kulliyyah IRKHS.

During the discussion, the speaker shared his view on the current situation among the Muslim communities in the UK and Australia. He also discussed the problems from various angles such as legal, social as well as the political dilemma being faced by the Muslim minorities in some countries across the globe. He also shared the census of Muslim Minorities in Australia, UK, US, France, and some other non-Muslim countries.

Later, the event continued with the research collaboration meeting led by Dr Suzi Fadhilah, Head of Research (AIKOL). Dr. Salim elaborated on some of the Research Clusters that exist in the Faculty of Law, University of Sydney as well as the opportunities for AIKOL academic staff to collaborate with them. The discussion ended at 1pm.

CONGRATULATONS ON WINNING THE ORAL PRESENTATION IN NSEPCOH