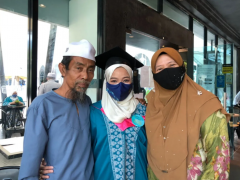 GOMBAK, 13 March 2022: The parents of Hanis Aisyah Ramli were overjoyed and speechless with the achievement of their daughter who graduated from Kulliyyah of Allied Health Science (KAHS) with best award for masters.

“Alhamdulillah, as a father, I am very proud of her success today because I myself cannot afford to study at this level like what she did, and I think her efforts are not in vain. I can’t say anything more, she is indeed our pride,” Ramli bin Sulaiman, the father of the graduand, told IIUMToday.

Meanwhile, her mother, Salbiah binti Abu Bakar was on the same page with her father in expressing her happiness with their daughter’s success in finishing her studies and receiving the best student award.

She said: “My daughter sacrificed a lot during her journey in pursuing her studies but we earned that back now with her success today, even though she had to go through difficult times and sometimes facing stress, but we were always there for her.”

“I am therefore proud of her,” she kept repeating her words while in tears.

Hanis Aisyah who started her masters in Health Science in 2017 did not expect to graduate this year, but managed to bring home Best Student award despite facing a roller coaster ride.

She admitted to IIUMToday that her first month in pursuing her master’s degree was very difficult as she faced many challenges, especially financially and emotional struggle.

“There was one time my laptop broke down and my phone dropped in the water, at the same time, I have to pay for my student fees.

“It’s hard for me as that early period of studies was the time where I needed to figure out what I was going to do but things happened. At some point, I felt like maybe I should stop but I managed to go through the journey that made me who I am today,” she added.

Besides, she advised the students to study smart and not just study hard because when you practice that, you do not have to do things so many times.

“Study smart but not too hard that would help reduce repetition and frustration. When you keep on repeating doing the same thing, you will get frustrated along the journey.”

As she has just got married, Hanis plans to have a stable career first and later pursue her studies at PhD level in the related field that match her master’s thesis.