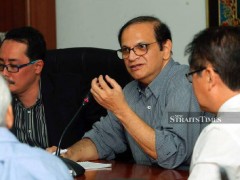 Multiculturalism based on Islam bedrock of Malaysia

KUALA LUMPUR: Malaysia’s multiculturalism, based on the teachings of Islam, continues to be the bedrock of the nation’s success.

He said Malaysia was a melting pot of cultures, religions and beliefs that had enriched the nation’s social fabric and made it conducive for knowledge, technology and the economy to flourish.

“Malaysia’s uniqueness came from it giving citizenship to one million non-Malays at the time of its independence.

“It became the source of the country’s multiculturalism as no other country had done that at the time.

“This framework has worked, and it has to be preserved and further built upon since there is a new government in power.

“That is what is expected of them,” said Imtiyaz after a discussion on a book titled Multiculturalism in Asia, Peace and Harmony at ISTAC-IIUM, here, on Tuesday.

The book, which is a collection of writings from prominent intellectuals and thought leaders from the region, was edited by Imtiyaz, who is known for his writings on ethnicity and inter-religious relations.

He said the Malaysian way of being open to other cultures has allowed the various races to thrive, while still preserving their linguistic, education and religious identities.

“Malaysia did right as it included outsiders and gave them citizenship, without driving them away as what happened to some other countries.

“This country gave them the right to practise their own language, religions and have their own schools.

“But, the challenge has since been about accommodating all sides,” he said.

Imtiyaz said adherence to the teachings of Islam had played a big role in Malaysia’s practice of multiculturalism. In this regard, he said, the country had benefited from its tolerant views on Islam.

“Islam in Southeast Asia is very moderate, inclusive and hospitable.

“The Indo-Malay practice of Islam is what I refer to as the maritime culture of Islam.

“The peoples are surrounded by the sea, and they are welcoming.

“They know the dangers of the sea. The peoples of these lands welcome foreigners and outsiders and they are hospitable to them.

“This is set against a backdrop of the southeast Asian culture, which is very moderate and inclusive. This has always been the culture.

“The Chinese and Europeans came to this region and this has something to do with Islam. It is a very inclusive religion,” he said.

More than anything, Imtiyaz believes that the Malaysian approach to foster unity under its leaders through the years had ensured its socio-economic stability.

As one of Asean’s economic power houses, he said, Malaysia became advanced in terms of human capital and management of natural resources because it thrived due to its diversity.

He said this was in stark contrast to states which were less effective in managing ethnic relations.

Imtiyaz cited Myanmar as an example, that despite it being an Asean member, the country continued to lag behind due to infighting, chaos and discrimination.

Even without the crisis that affected the Rohingyas in Rakhine state, Myanmar faced an uphill challenge in uniting its multi-ethnic society, he added.

“In Myanmar, there continues to be infighting among 135 ethnic groups, excluding the Rohingyas.

“Myanmar does not have the benefit of having stable development.

“It should take a leaf from leading Asean countries like Malaysia and Thailand on how to be accommodating to different groups.”

Imtiyaz said the long history of enlightened and intellectual statesmen in Malaysia had gained the nation great respect worldwide, particularly among Muslim countries.

He cited the country’s first prime minister, Tunku Abdul Rahman Putra Al-Haj, as an example of a highly charismatic leader who helped the country to achieve independence.

He said the Tunku became a leader at a time when many Asian states were seeking independence, and he achieved independence in a peaceful manner.

“At the time of Malaysia’s independence, the leaders in the region were in a different class.

“Tunku Abdul Rahman’ leadership was on the same level as people such as Jawaharlal Nehru, Gamal Abdel Nasser Hussein and even Soekarno.

“They paved the way for the next breed of leaders, who comprised people such as Tun Dr Mahathir Mohamad, who focused on domestic development,” he said.

Congratulations on the 'Outstanding Volunteer 2020' Award