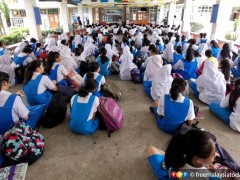 The focus of the Asrama Malaysia programme is to encourage racial and religious tolerance by having students of all races live and carry out activities under one roof.

Muhd Shukri Kamarudin, the deputy director of the boarding school sub-unit under the Education Department of the Federal Territories and Kuala Lumpur (JPWPKL), said the education ministry’s Asrama Malaysia (formerly known as Asrama 1Malaysia) programme had led to greater understanding and harmony among the schoolchildren involved.

Shukri, who was the third dean of the Victoria Institution boarding school from 2013 to 2017, said the focus of the programme was to encourage racial and religious tolerance by having students of all races live and carry out activities under one roof.

“Children spend a lot of their time in schools, but if they are in boarding schools the hours spent at the school continue after schooling hours, as they also sleep at the boarding school. If there are 11,000 hours in a year, 57% of that is spent at the dormitories,” he told a forum on encouraging unity through education organised by Yayasan Perpaduan Malaysia at the International Institute of Islamic Thought and Civilisation.

The forum was attended by members of civil society and the public. Some of their suggestions will be included in a resolution to be drafted by Yayasan Perpaduan. The resolution will be submitted to the ministry of education and the Department of National Unity and Integration.

Shukri listed programmes carried out in the boarding schools, such as community service programmes, modules teaching traditional dances and languages such as Bahasa Malaysia, Tamil, and Mandarin, and open houses that were held during every festive season.

“There are no classes teaching the different cultures, but they participate in modules and get credit points (for their academic performance) if they learn new languages or the traditional dance of a different culture.

“That is how unity is achieved. Not by learning a specific module but through them spending time together in their dormitories, because they see and talk to each other every day,” he said.

He added that even Form 1 students who were from vernacular or Malay-majority national schools would eventually learn to mix with other races once they reached Form 4 or Form 5.

“In the beginning, they may stick with their own groups, we can’t deny that. They are simply used to it, and mixing around with other races may feel awkward,” he said.

However, he said there were challenges in ensuring continuing success of the programme as fewer and fewer Chinese and Indian parents were sending their children to attend the boarding schools. He said this was partly due to the fear among minority-group parents that their children might end up converting to Islam.

“I won’t deny that Asrama Malaysia may end up having more Malay students when there are fewer Chinese and Indian students wanting to apply. That will happen,” he said, adding that he feared the programme might become obsolete if only one race were to participate. He said, this was already happening in Victoria Institution.

Meanwhile, the head of the Education Policy Planning and Research Department at the ministry of education, Shamsudin Mohd, said there had always been policies encouraging unity from the time Malaysia achieved Independence.

Unity was also a core policy in the Malaysian Education Development Plan (PPPM) 2013-2025, he said.

Shamsudin said parents and the community were responsible for informal education outside of schools. Acknowledging there were gaps between policy and implementation, he said: “If we want to close the gap there must be collaboration and we must help each other. We at the education sector have already set the foundation.

“Whenever there’s any issue, parents blame the ministry, but we must remember that education begins with us – as parents and as a community. We hope for collaboration,” he said, adding that parents and the media played a big role in encouraging unity.

On a related matter, he added that the ministry conducts a national study every two years to measure unity as defined in the policy.

He said the constructs were scored with different indices such as low, medium-low, medium-high and high, and the respondents were given questionnaires.

“The trend was still similar. Unity among teachers and students is still hovering around the medium-high score, which measures between 5.1 to 7.5. For the construct of accepting differences, it is still in the medium-high range. This can be improved,” he added.