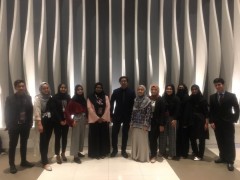 IIUM MUN students have also achieved various individual awards and commendations in the competition, which are: