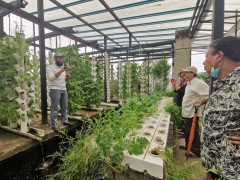 IIUM to work with ‘Urban Hijau’ to create sustainable garden

KUALA LUMPUR, 14 August 2020: IIUM will be collaborating with ‘Urban Hijau’, a sustainable urban farm which is using vertical hydroponic systems, to create a sustainable garden called ‘akar budi’ in IIUM by using biodiversity and biological waste to farm.

The Rector, Prof. Emeritus Tan Sri Dato’ Dzulkifli Abdul Razak was delighted with the proposal presented by ‘Urban Hijau’ on its initiative to work closely with IIUM in creating the garden of knowledge and virtue version 2.0.

The farm, which is located in the housing area of Taman Tun Dr. Ismail here creates a wonderful greenery sight for its residents and visitors.

“This is a good example of what a garden should look like in IIUM which is called ‘Permaculture Design’, which means that this garden is a permanent and a productive garden of different diversity.”

The Rector explained on the making of garden of knowledge and virtue version 2.0 by taking ‘Urban Hijau’ as the model to be implemented in IIUM soon.

“We are trying to make it into the garden of knowledge and virtue 2.0, meaning to say that the garden is not only for beauty and ecstatic value, but it is also for productivity.

IIUM now has about 10 gardens but we need to coordinate them so that they will become sustainable, collective and become part of the culture of the university,” he added.***