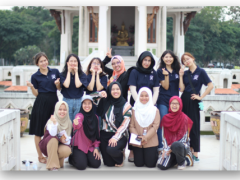 Nusantara Mobility Network is a series of programmes that cater to the students’ exposure with international events. After a first MOU was signed between International Islamic University Malaysia (IIUM) and Naresuan University (NU), Thailand in April 2018, both departments of Department of English, Kulliyyah of Languages and Management (KLM) and Department of English, Faculty of Humanities, from each university respectively had collaborated for the first time in a research seminar.

The Undergraduate & Postgraduate Research Presentation and Seminar was organised by the Faculty of Humanities of Naresuan University. It was held at Naresuan University of Thailand on 21 until 24 November 2018. Further bilateral cooperation between both universities were strengthened through the participation from students and lecturers of KLM, IIUM Pagoh.

The Language and Literature seminar aimed to have the students to share and contribute research areas to foreign university. It provided a platform for the students to present their work at international level as well as enhancing their communication skills.

Assoc. Prof. Dr. Watana Padgate, Dean of the Faculty of Humanities was giving his speech

The seminar started off on the second day with an opening and welcoming speech by Assoc. Prof. Dr. Watana Padgate, Dean of the Faculty of Humanities followed by a response to the welcome speech by the delegates of KLM.

Next up was a discussion on future academic collaboration between the two departments followed by presentations from the final year students of Naresuan University. Students of both universities were presenting their final year project (FYP) and received feedback from each of the lecturers from both universities.

“I presented my FYP on ‘Turn Taking Analysing in the Tonight Show with Jimmy Falon’ during the seminar,” said Aida Zukrina, one of the representatives from IIUM Pagoh. “The paper focused on the reason behind the occurrence of overlaps, simultaneous utterances and interruptions in a conversation between Jimmy Fallon and Donald Trump.” she said in a statement.

“I remembered one of the lecturers from Naresuan questioned on the theory used in my research,” she continued, “I also recognized that their students do inculcate their culture in the research studies and it is something refreshing that we get to learn new culture through the seminar.”

This mobility programme also has bestow huge opportunity for the students to learn and exchange their culture and language. On the same day, the students got to experience the Loy Kratong Day. It was for the Buddhists to seek forgiveness from their God of Water.

The students had partaken the Loy Kratong Festival that was held near the Wat Phra Sri Rattana Mahathat Temple; the biggest temple in the province. Throughout the sightseeing, it was an eye-opener for the Muslim students of KLM on the celebration of other religion abroad.

An exclusive slot on the second last day saw the representatives of Kulliyyah of Languages and Management to deliver a special lecture on ‘How Important the CEFR in the Language Learning’.

The seminar was a success and KLM students managed to present their paper to the delegates of Naresuan University. “There were a lot to learn from each other’s research practices,” said Rawdhah Paiz, one of IIUM’s representatives. “We will try to get the paper published” she said in her statement.

The IIUM representatives expressed their hope to invite a group of students from abroad to visit IIUM Pagoh. They also wished to conduct a similar event to promote Malaysian higher education system to the foreign students in the future.