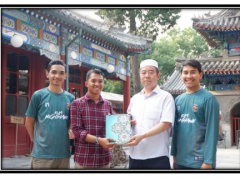 On 16 until 23 June 2019, a group of 12 IIUM students were participating in the Mobility Outreach Program 3.0: China, which was aimed to help Chinese-Muslim community in Beijing area specifically while exploring China’s culture.

The program was fully organized by Kulliyyah of Languages and Management Students’ Society (KLMSS) and it was partly funded and self-sponsored by the participants themselves.

These students had been taking Mandarin class for two levels in two consecutive semesters. They were accompanied by their Mandarin lecturer, Muhammad Nazirul Mohd Noor, together with a KLM officer, Siti Aminah binti Abas.

The students in front of  the Legendary Summer Palace

The IIUM Quran was delivered by the accompanied lecturer, Muhammad Nazirul Mohd Noor (second from left), together with program manager, Mohd Aasim Addli (on the left), and his assistant, Muhammad Hanif Naim (on the right) to the respective Imam of Niujie Mosque.

The students were at the entrance of Jingshan Park

“We have learnt a lot from the historic places we visited and get used with communicating in Mandarin through this program,” said one of the participants.

It is hoped to see the culture that has been discovered, the moments that have been cherished, and the lesson that has been taught during the program as something beneficial to the participants and people who surround them as a way to create better generation that will lead future Malaysia. More details read here https://news.iium.edu.my/?p=130926