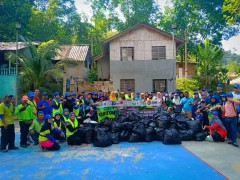 IIUM River of Life under Kulliyyah of Engineering conducted its 6th Gotong Royong event at Kampung Orang Asli, Batu 12 Gombak. This community project is among many activities planned by IIUM River of Life to increase environmental awareness among the public and local people on the importance of taking care of the environment.

After the clean-up, a total of 281kg rubbish were collected. Approximately more than half of the rubbish collected were plastic wastes.

IIUM Rector,  Professor Emeritus Tan Sri Dato Dzulkifli Abdul Razak commended on this collective effort because it is important to ensure that these project continue in the future. He also thanked the orang Asli community and hope that this kind of activities will strengthen the relationship between the university and community.

FOSP under IIUM ROL would like to thank all parties that were involved and supported this Gotong Royong project directly and directly.

Mahallah and Kulliyyah to work together to benefit residents