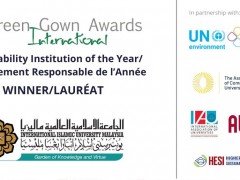 KUALA LUMPUR, July 9 -- The International Islamic University Malaysia (IIUM) has made history as the first university in the country to receive an International Green Gown Award for the 2020 Best Sustainable Institution category.

UIAM in a statement today said, the awards ceremony was held via online in New York, USA last night, with the support of the United Nation Environment, International Association of Universities (IAU) and the Commonwealth University Association (ACU).

In the category, IIUM was last listed with eight other universities including from Australia, Britain, Columbia, Mexico, the Philippines and Peru.

It is also the highest recognition given to higher education institutions that carry out sustainability efforts to achieve the United Nations (UN) global sustainability objectives, the statement said.

According to IIUM, the award is given to universities from around the world in recognition of the efforts in developing sustainability in their own countries and having positive impacts on the well-being of local communities.

IIUM rector Prof Emeritus Tan Sri Dzulkifli Abdul Razak in a statement said the university was the first institution of higher learning in Malaysia and Asia to receive such a recognition as well as being the first for an Islamic educational institution.

“The award is a recognition for the university to make a difference in the expertise recognised by the United Nations.

“It places IIUM among one of the universities that plays a key role in changing and also finding a new approach to education in the furure,” he said.

Meanwhile, IIUM was also a finalist for the  Benefitting Society Award via the LIGHT (Leadership, Intuitive, Giving, Humility, Tenacity) programme hosted by the Kulliyyah of Architecture and Environmental Design (KAED) and Universiti Sains Islam Malaysia (USIM).

This award was won by a university from Peru.

Earlier, in March this year IIUM was declared the Regional Centre of Expertise (RCE) on Education by the United Nations University (UNU) which was given the name RCE Greater Gombak which emphasises the development of sustainable education activities and initiatives together with the community.

The award said IIUM, given by the Environmental Association for Universities and Colleges (EAUC), a United Kingdom (UK) based organisation with over 220 memberships in universities and colleges which supports sustainability in the education sector and is not confined to the UK alone.