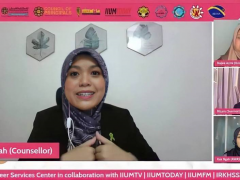 Fear to ask for mental health help #YouMatter: Am I to be blamed?

Fear to ask for mental health help #YouMatter: Am I to be blamed?

GOMBAK, 16 July 2021: Despite the increase in mental health awareness campaign, individuals with mental health issues are still afraid to reach out for help due to fear of stigma and a high feeling of guilt.

This was the common view shared by the speakers in a discussion on “Am I to be blamed?” which was conducted live yesterday (15 July).

The speakers were Madam Masturah, Counsellor, from the Counselling and Career Services Centre (CCSC), along with Nizam Mustapha, a survivor of anxiety and Major Depressive Disorder (MDD), and Kak Ngah @ Alia Ali, founder of Awareness Against Suicide (AWAS) Malaysia and president of ZuriatCARE.

The discussion centred mainly on the concerns of people living with mental health issues in reaching out for help even when they are equipped with the information to do so.

According to Madam Masturah, there are three factors for the fear among people living with mental illnesses to ask for help. Firstly, fear of family and society acceptance on their mental health problem. An individual living in an environment of unsupportive family and society with a high stigma on mental health issues may find it hard to admit to their condition.

Lastly, uncertainty in the policy. People living with a mental health condition fear that their mental health diagnosis record could harm their job and academic opportunities. They are concerned with their record being known to employers, deans in the university or among colleagues. However, when individuals with mental health issues feel secured about the mental-health policy and their rights, they will feel less anxious in admitting to their condition and asking for help.

Feelings of guilt for having a mental illness condition is common among people with a mental health issue. As Masturah mentioned, the factors to one’s guilty feelings is because of their privileged position. People can be privileged in terms of being academically smart, having financial stability or living in a stable family and these are the reasons for an individual to blame themselves for suffering from mental health issues.

But, “being privileged does not make a person immune to mental health problems,” said Madam Masturah.

She added that a person’s past mistake followed by excessive guilt are also contributing factors for one to feel guilty about having a mental illness. An individual with a mental health issue may view themselves as undeserving or unentitled to get help because they regard every past mistake as their own fault.

As a mental health survivor, Nizam Mustapha displayed his agreement on Madam Masturah’s points with his own experience in recovering from mental disorders. He emphasised that people should not self-diagnose their illness because it leads to wrong treatment. “Meeting a therapist and getting the proper diagnoses is one step closer for you to get better,” said Nizam Mustapha.

He added: “People with mental health conditions want someone to be a listener whenever they are having mental breakdowns, and to not provide them with solutions as it is close to impossible.”

Kak Ngah highlights on postvention, which refers to the support given to family, friends or a community that are heavily affected or traumatised by a suicide loss.

Suicide loss survivors are prone to feeling guilty, scared and ashamed. This is because, “society tends to be judgemental to news of suicides, relating it to the lack of spiritual and religious beliefs and low life that are unemphatic to suicide loss survivors” Kak Ngah shared.

Moreover, suicide loss survivors tend to feel guilty due to failure to recognize suicide behaviours and signs of their family member or a friend.

Kak Ngah mentions that it is important for suicide loss survivors to get support from the community after a traumatic incident because they are likely to feel suicidal and suffer from mental health issues such as anxiety and depression.

“We should be more emphatic and compassionate to people living with mental health issues,” Masturah added. It is important that we empower people with mental health problems rather than viewing them as a “lost cause” or criticising them based on any aspect, including religious factors. Offering help and listening to those who suffer from mental health conditions can solve half of the problem.

This talk is the second #YouMatter series hosted by IIUMtv and was carried out live on IIUMtv’s YouTube and Facebook page with over 60 participants attending.

Congratulations to the KOP recipients of FRGS 2022