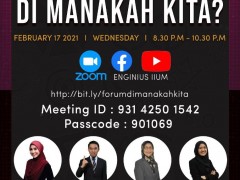 The programme started with welcoming remarks by the organizer, Sr. Nabilah from Enginius, and opened with Surah Al Fatihah on the Zoom platform before it was made live through the ENGINIUS youtube channel. The montage video on K-pop was then shared with all participants. The forum was then taken over by the invited moderator, Pn. Irma Hasmie led the forum by asking the panelists in turns. There were two rounds of questions dedicated to each panel related to their background.

The discussion was further enlightened with the question from the participant, but due to time constraints, not many questions could be asked. The forum managed to attract many K-poppers, fans, and ‘stan’, who were among the teenagers, who communicated to each other, which can be seen from youtube live chat. The attendance link was given to the participants 30 minutes after the programme had started and the feedback survey link was also given towards the end of the programme. It is observed from the attendance
list that the programme has attracted a total of 926 attendees which consist of 114 IIUM Staff, 368 IIUM students, and 444 participants from the outside community. The youtube channel successfully attracted at most 618 views during the live streaming session and kept increasing to 4.4k viewing as of 18/2/2021.

Generally, the program has successfully addressed the k-pop issues among Malaysian society, particularly among teenagers, and it is hoped that it may trigger all levels of Malaysian communities to take necessary actions for the benefit of all.

Highest appreciation to organizers, speakers, and viewers who have participated in this virtual forum. May this forum can make us realize the more important things in life, living as a Muslim, and can guide us closer to Allah SWT, insyaAllah.

For those who missed it, you can now watch the replay at Enginius IIUM youtube channel