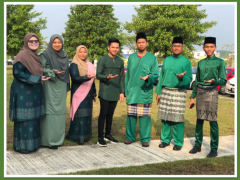 Pertandingan Pantun Piala Gustam Negara was organised by the Majlis Mahasiswa Kolej Harun Aminurrasid, UPSI on 9th March 2019 at Universiti Pendidikan Sultan Idris (UPSI), Perak. This is the second time IIUM Pagoh Pantun team has qualified for the final stage of an open competition. The team has won the second place in the competition and one of the participants, Br. Muhammad Nor Sahfiq Bin Amran, was awarded with ‘Pemantun Terbaik’ for overall tournament. Congratulations to the team on the winning.