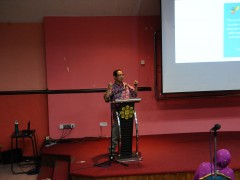 GOMBAK, 10 August 2020: Centre for Languages and Pre-University Academic Development (CELPAD) is an essential centre for language which acts as a medium of transforming information and messages to make it at the right context, said Prof. Emeritus Tan Sri Dato’ Dzulkifli Abdul Razak during his visit to CELPAD here on Monday.

He urged CELPAD to produce ideas on which dimension needs to be changed and remained  for the benefit of its community. The centre is built not only for students to speak the language but rather to understand the language is more important, and CELPAD needs to figure out  how to move further.

“Language makes a person and therefore we need to internalise it, practice it, understand it and that’s a whole new spectrum that we need to learn.”

The Rector commented that some countries have been using language as a platform to introduce their culture and values to other communities around them. This is done by introducing and presenting the language into  different dimensions.

“I think we need to do that because as the world gets globalised and people would like to know your culture so I think you must bring this bigger picture into the discussion,” he added.

The Rector had also suggested for CELPAD to initiate a project which integrates the language and mental health. This would also involve counselling for all the community in IIUM.

According to the Director of CELPAD, Dr. Rosnani Kassim, the centre has planned in engaging language and mental health which will be included in their curriculum soon.

“I could already see us including topics that include issues on mental health and when we include issues, therefore the language that we use will be also covered, meaning we approach the issue and the ‘vehicle’ is English.

This is an opportunity for collaboration where we have the language but we do not have the expertise, so I could see a collaboration between CELPAD and Human Sciences to make it a reality,” she added.***

Is Malaysia ready for full implementation of virtual learning?