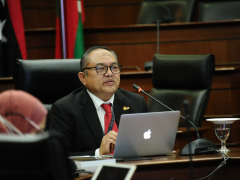 Gombak, 15 December 2021. Ahmad Ibrahim Kulliyyah of Laws organises the Inaugural Professorial Lecture for Professor Dr Nik Ahmad Kamal Nik Mahmod on the topic of the role of the monarchy in the constitutional process.

Professor Nik Ahmad Kamal Nik Mahmod emphasises that although the role of the monarchy, including the Yang di-Pertuan Agong are mostly symbolic, the unprecedented simple majority hold by the government of the day after the 2018 general election and the exceptional public health crisis of COVID-19 pandemic call attention to the important role of the monarchy.

In the lead-in to his lecture, Professor Nik Ahmad Kamal Nik Mahmod acknowledges the continuous support and encouragement given by his family, particularly his dear wife, Puan Rose Haliza Haron.

Professor Emeritus Tan Sri Dato’ Dzulkifli Abdul Razak, the Rector of International Islamic University Malaysia in his opening speech highlights the role of the Yang di-Pertuan Agong as the arbiter in the appointment of the Prime Minister and in ensuring the stability and harmony of the nation.

Professor Farid Sufian Shuaib, the Dean of Ahmad Ibrahim Kulliyyah of Laws in his opening remarks underline the opportunity given by the Inaugural Professorial Lecture for professors to celebrate their achievement in academia and to reach audience outside the usual circle of scholars.  According to Professor Farid Sufian Shuaib, it is fitting for Professor Nik Ahmad Kamal Nik Mahmod to deliver the first Inaugural Professorial Lecture organised by the Kulliyyah (rather than the university) considering his expertise and his contribution to the Kulliyyah, the university and the society.