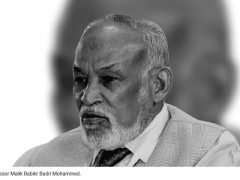 Prof Malik Badri - The loss of an intellectual icon

An African proverb says: "When an old man dies, a library burns to the ground." This is a testimony as to the importance of the knowledge and wisdom that one possesses through life long experience.

In other words, it is almost an irreversible loss of knowledge, especially the tacit ones that lead to deep seated wisdom. What is more to talk about an intellectual giant who had dedicated his life time uncompromisingly to the betterment of humankind and civilisation.

One of them was Professor Malik Babikr Badri Mohammed who passed away recently (1932–2021), more specifically on Feb 8, in Kuala Lumpur, a few days shy of his 89th birthday. He was a Sudanese author, clinician and professor of psychology whose claim to fame was as founder of the modern Islamic psychology.

The influential book "The Dilemma of Muslim Psychologists" acted as a beacon that brightens a new path away from the proverbial "lizard hole." This is the book that linked me as a young academic to him in my studies of the neurosciences in the search into the future.

It was not until 2019 that I had the good fortune of meeting him in person at the International Islamic University Malaysia (IIUM) when he expressed his wish to return to the university after spending a few years in another country.

Malik was a pioneering member in the Kulliyyah of Islamic Revealed Knowledge and Human Science (KIRKHS) when it was established some 30 years ago. He started as a Visiting Professor in the Department of Psychology in 1991, and later joined the department in June 1992 as a full professor.

Two years later, in July 1994, he was appointed Professor of Psychology (Islamic Psychology) at the International Institute of Islamic Thought and Civilization (ISTAC) which is part of IIUM. In 1997, he initiated the gathering of Muslim psychologists from all over the world at IIUM, leading to the establishment of the International Association of Muslim Psychologists (IAMP) which is very much active today.

All along he dedicated himself in developing and training psychotherapists as well as clinical trainees in psychology at IIUM. At the same time, he was deeply involved in giving talks both within the campus and beyond, including keynote addresses on Islamic Psychology and its application in solving psychosocial issues. Even in the very last days of his life, he still played an active role in giving lectures at the invitation of various parties. On his departure, the metaphor of "a burned down library" is indeed a very sad one!

As a highly respected academic, he was effective in conducting classes, and is also prolific in his writing. He was instrumental in linking the courses offered in IIUM to that of the earlier Muslim intellectual giants, scholars and philosophers notably the renowned Al-Ghazali, Ibn Khaldun and Al-Balkhi to name a few. Malik was the holder of the Ibn Khaldun Chair at KIRKHS until 2017.

In the Middle East, he established the Imam Muhammad ibn Saud Islamic University, and the Psychological Clinic of the University of Riyadh as early as in 1971. Before returning to IIUM, he worked at Istanbul Sabahattin Zaim University as a Professor of Psychology.

Beside his opus magnum, he wrote many titles such as 'Contemplation: An Islamic Psychospiritual Study,' 'Abu Zayd al-Balkhi's Sustenance of the Soul: The Cognitive Behaviour Therapy of a Ninth Century Physician,' 'Islam and AIDS: Between scorn, pity and justice, Islamizing and Indigenizing Psychology', 'Psychology from an Islamic perspective', even for children as in 'The Psychology of Arab Children's Drawings'. Some titles have been translated into other languages of the Islamic and Arab world and Russian.

Malik was bestowed several recognitions by Unesco, WHO as well as his home country, Sudan - the medal of Shahid Zubair in April 2003, the highest for academic excellence. He is survived by his wife, Dr Fatimah and seven children.

He will be fondly missed by many, especially his colleagues and students worldwide. Thus, unlike the metaphor of a burned library, his legacy will continue to live on in many institutions internationally that will bear not only his works, but also name currently and in the time to come. May his soul be blessed and be placed in Paradise among the pious.

The writer, an NST columnist for more than 20 years, is International Islamic University Malaysia rector

Congratulations to all 3MT winners at Kulliyyah level!