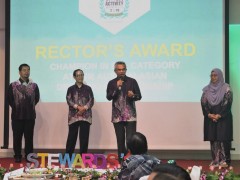 By Ariani Mohd Nor (IIUM Today)

GOMBAK - - The President of IIUM, Datuk Dr. Mohd Daud Bakar, has called on IIUM students to be more active in their co-curricular activities in order to become great leaders.

He said this during the Student Activity Awards (STEWARDS) 2019 on Friday (8 November 2019) at Wadi Budi, in campus here.

In a session with IIUMToday later, he explained that he strongly believes that IIUM students have the capability of being notable and to become prominent figures in the future.

“Events such as the Student Activity Awards 2019 is a great platform to showcase students’ achievement and what they can do to bring the university’s name out there,” he said.

“Imagine the intensity of their achievements when they finally get out there (after they graduate).”

He added, “We are a great university producing capable and high-performing leaders. Not only for the society but also for the university, the nation, and the ummah.”

Datuk Dr. Daud also mentioned his plans on the making of IIUM to give more motivation and provide opportunities for the students to participate more in activities not only for themselves and the university, but also for the betterment of the ummah.

“We need to make things bigger and motivating for everyone,” he said. “And IIUM is capable of doing that for students.”

During STEWARDS 2019, the IIUM Student Union (IIUMSU) was also given special recognition by the President.

Asked on the Student Union, Datuk Dr. Daud Bakar expressed pride to the committee members for making it possible but emphasised the weight of responsibility this will mean to the new student leaders.

“We are the first of many more to come, but I am still proud of IIUM for leading the movement for many,” he said.

“I think we really need to be on board with the Student Union and we need to put them on the right platform to understand how big their (students’) roles are.”

At the end of the session with IIUMToday, Dr. Daud Bakar also noted that he is looking forward to the first IIUM Student Union (IIUMSU) election and plans to allocate his time to make sure the new leaders understand the “new” version of leadership under IIUMSU constitution.

“We will be celebrating freedom of speech and freedom of power,” he said. “But we have to be cautious about using the power to do the better, and minimal bad.”

The IIUM Student Activity Awards is an annual event initiated by the Office of Deputy Rector (Student Development and Community Engagement) to appreciate high-achieving students in conducting high-impact events in their societies.

A total of 17 categories were being contested, with the addition of three prestigious awards – the Outstanding Programme Award, the Rector’s Award, and the President’s Award. ***

Re education training THE NEW NORM