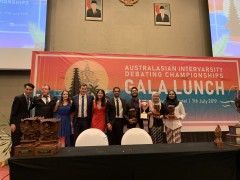 International Islamic University Malaysia English debate team brought yet another
honour to the nation when they won the ESL Category of the Australasian Intervarsity
Debating Championship held at Bali, Indonesia on 7 th July 2019. The Australasian
Intervarsity Debating Championship is the second largest debating tournament in the world. A total of 70 teams from Australia, New Zealand and Asia participated in this year’s championship. Several Malaysian universities also took part in the competition.

The IIUM team 2 that won the ESL Category consisted of Ms. Nur Hana Izzati Binti Zawawi, 3 rd year economics, Mr. Ameer Fahmi Ishak, 3 rd year Bachelor of English Language and Literature, and Ms. Umy Marshita Mohamed Azhar, 1 st year law student. Furthermore, all members of IIUM team 2 and IIUM team 1 were awarded the Top Ten Best Speakers (ESL Category) Awards of the tournament. In the Grand Final of the ESL Category, the IIUM team debated against the University of Malaya team 1 on the motion that the ICC should abolish the principle of complementarity. The IIUM team argued that ICC should complement the national courts in convicting crimes of genocide or war crimes instead of trying to exercise universal jurisdiction over all countries. After a highly contested debate, IIUM team beat the University of Malaya team in a 6-3 split decision. IIUM debater Mr. Ameer Fahmi Ishak was awarded the Best Speaker of the Grand for his highly responsive and entertaining speech.

IIUM team member Ms. Umy Mashita was very elated with the team’s win as the
youngest member of the team. She says, IIUM has done historically well in international
debate tournaments and as a very junior member of the team she feels the pressure to
continue the performance and she hopes she will continue to learn and achieve greater
heights. When asked about her advise to up-and-coming debaters of the nation, Ms. Umy said, ‘read, think and make sense when you speak’. According to her, there is no short-cut; dedicated reading and training is the only way to make an impact in international debate tournaments.