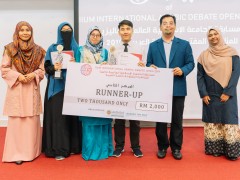 IIUM World Debate and Oratory Centre (IWON) would like to congratulate the Arabic Debate Club for their achievements at the IIUM International Arabic Debate Open 2019 (IIADO) on 3rd – 4th August 2019. IIUM Debate Team B has been crowned as the Champion and IIUM Debate Team (Pagoh) as Runner-up for that competition during this time. Over 23 teams from 16 various Institute of higher learning  has participated on this tournament and try to competed each other until to the end. Two of our debaters also awarded as 2nd Overall Best Speaker and Final Best Speaker. IIUM Winners are as follows: