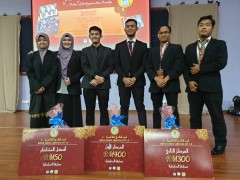 IWON would like to congratulate the IIUM Arabic Debate and Public Speaking Club for their achievements at the World Arabic Language Day organised by Kolej Universiti Islam Selangor (KUIS). The debate tournament was held on 14th December 2019 at KUIS, Kajang.

Two IIUM teams participated and reached the grand final of the debate tournament. Team IIUM A emerged as the overall Champion of the competition. Sr. Umi Khairunnisa from team IIUM A was also chosen as the Best Overall Debater.

IIUM B: - Runners Up

IWON look forward to our debaters’ future achievements in solidifying IIUM’s position as a debate powerhouse in Malaysia. Congratulations again.