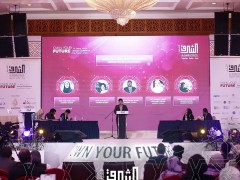 This is the 5th Conference organised by the Al Sharq Youth and the first in Malaysia. The conference was attended by many political and business dignitaries. IIUM World Debate and Oratory Centre was invited to stage an exhibition debate. IWON presented a short version of debate on the motion that “AI would bring more harm than good.” The IIUM students who spoke in the event are:

Conference participants together with many dignitaries watched the debate presented by the IWON. Among the people who watched the debate were many journalists of Aljazeera and other news networks, CEOs of start-ups and technology companies, the youngest parliamentarian from Turkey and youth activists from many Muslim countries.