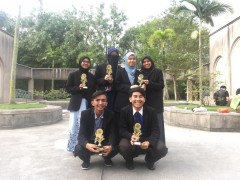 IIUM World Debate and Oratory Center (IWON) Pagoh Edu Hub would like to congratulate our students for winning the IIUM Arabic Debate League Championship 2018, which was organized by semesterly by the IIUM Arabic Debate Club, Gombak Campus. Two teams; IIUM Pagoh A and IIUM Pagoh B participated in the progam which was held from 17th until a8th November 2018 in IIUM Gombak.