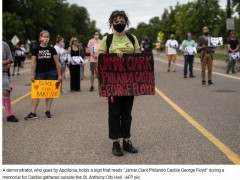 JULY 1 marked another date for an unprecedented event of the Covid-19 making, following the demise of "I can't breathe" George Floyd.

It exposes how pervasive the hatred is in the current socio-economic system that many are profiteering from it.

Recall how "terrorism" was framed in similar way so much so it is allegedly regarded as an industry to profit from.

There are so-called experts and consultants who peddled the bigoted message as something that is "politically correct", if not desirable, to advance a position well supported by the powers that be for its own convenience and survival.

Some in the publishing industry, for example, are not short of titles written to market the hate messages in the name of democracy and freedom of expression.

However, this time it is somewhat different. More than 400 companies have since paused, if not withdraw, from placing advertisements, at least on social media platform.

The tagline #StopHateforProfit is created by a coalition of the US' most storied civil rights organisations such as the Anti-Defamation League, the National Association for the Advancement of Colored People (NAACP), Color Of Change, Free Press and Common Sense, calling for some of the world's largest corporations to pause advertising on Facebook throughout the month of July.

These are among the world renowned companies that most could easily identify as household names worldwide, sending ripples far and wide.

That it is wide-ranging gives a good indication of serious social concerns that "all lives matter" — and not just directed at the coloured as often being portrayed in the media.

Incidentally, "white" is also a colour so there is no need to fly a separate banner as though to overshadow the others who have been unjustly profiled for centuries in a systematic way.

The assumption that "white" is not a part of the "coloured" is already a wrong frame of mind, as though putting it a class above the rest. In fact, it is often said to be the source of bias and bigotry that spews all manner of hatred verbally or otherwise, subtly.

Thus, captions like "fair", "whiter", "whitening" are themselves prejudicial when applied to certain persons, products, circumstances and events. Needless to say, recently, some of them have been, rightly, withdrawn or relabelled. Just that, why only now? This gives rise to the allegation of "tokenism" — if not hypocrisy.

In the case of #StopHateforProfit, the word "Hate" could be easily substituted with other words like "sugar" for those who sell sugary canned drinks, for example. Or "junk" for fast food companies. Even "racism" for those involved in sports apparel business and so on.

But this does not seem to matter at all, as some of those participating in the #StopHateforProfit are themselves presumably guilty of similar sins.

This is where education must come into the picture as an alternative solution that is more authentic. Not so much to endorse the commercial jostling on the social media, but more about putting things right, behaviourally speaking.

This is in recognition of the fact that the social media as a platform has its place in today's world of instant communication and gratification.

Bearing in mind the poor quality or values involved that translate into detrimental effects on the larger social fabric.

Be it unwarranted social tension, various forms of ill-health or disease and emotional dysphoria — all causing more chaos in a world that is already at a tipping point.

Consequently, the world of education is also implicated for it is where the social media culture starts to take root and shaping the (hostile) mindset that eventually coloured the world.

In other words, the social media being taught to the students as an educational tool in the journey of discovery is used almost overwhelmingly in the negative way. It is linked to the controversial state of affairs that is confronting us today.

Because of this, the International Islamic University Malaysia took the initiative to launch #2lead4peace with the aim to call on all social media users to resort to the ethics of zero-tolerance towards any form of messages that brings about negative (read hatred, bigotry, fake, lies) consequences.

Since education is sensitive to values and ethics, the #2lead4peace campaign is meant to craft a fresh start in reconstructing a new positive normal for the social media platform moving forward.