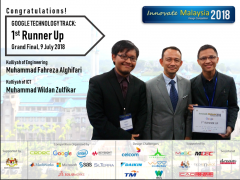 The IMDC2018: Grand Finals which was held on the 9th of July 2018 at MagiC Cyberjaya.  From more than 900 contestants, both Fahreza and Wildan were being shortlisted among 39 finalists. Their promising project was known as “Application of Speech Emotion Recognition using Google Tensorflow Deep Neural Network for Suicide Prevention Hotlines” (EMOS). Technically EMOS was supervised by Prof. Dr. Teddy Surya Gunawan (KOE). Psychological contents and logistic were supported by Counseling and Career Services Centre (CCSC). The same project was also being awarded “Best Project of the Region” (with a status of Excellent Award).