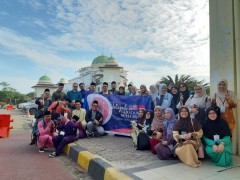 “Fakulti Adab dan Kemanusiaan” of the Islamic State University of Ar-Raniry Banda Aceh in collaboration with Kulliyyah of Allied Health Sciences (KAHS), International Islamic University Malaysia (IIUM) Kuantan, Pahang, held a “Seminar Da'wah dan Tamaddun Aceh-Pahang” on Friday (23/8/2019) at the “Fakulti Adab dan Kemanusiaan” Auditorium at the local campus. This seminar is in conjunction with IIUM flagship hosted by KAHS which is known as Health Information and Knowledge from Malay Medical Manuscripts (HIKAM).

This seminar is one of the "Jelajah Tamadun Islam Aceh" program initiated by the IIUM. In addition to the Malaysian delegation of about 30 people, the seminar included UIN campus residents, alumni and other UIN guests.

According to Abdul Manan, this activity is the platform to develop the faculty. He hoped that the activities would be followed by other activities to enhance cooperation between the “Fakulti Adab dan Kemanusiaan” of U-Ar-Raniry with IIUM Kuantan, Pahang.

"In the future, it is hoped that this collaboration and good relations will be further developed in other forms of academic activities such as student exchange, community service, scientific paper publishing and collaborative research," Abdul Manan said in a speech on Friday (23/8).

The event organized by Hermansyah, a lecturer in Philology at the “Fakulti Adab dan Kemanusiaan” at UIN Ar-Raniry has gathered speakers from both universities.

As we know, the relationship between Aceh and Pahang has been around since the time of the Aceh Sultanate during the reign of Iskandar Muda. He brought many people from Pahang to Aceh and one of them made Sultan Iskandar Tsani his adopted son and married his daughter Sultanah Shafiyatuddin to Tajul Alam.