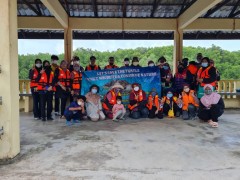 Among the objectives of the CSR programme are:

1. To trigger awareness on the importance of ensuring the cleanliness of the beaches

2. To facilitate in maintaining clean and safe beach as part of pivotal effort to

3. To stimulate an interest, feeling of concern, responsibility on turtle and mangrove

4. To appreciate and instill responsibility in helping to sustain the earth that is created

5. To get closer to Allah, to seek His blessings and forgiveness by doing charity and

seek donation to protect the wildlife and environment

6. To strengthen the ukhuwah among staff of Biology Department and other department too

The Cherating Turtle Sanctuary is a turtle conservation center which was set up by the government mainly for research and as a platform to protect the four main species of turtles that are nested in Malaysia. The four species are the Olive-Ridley, Leatherback, Green, and Hawksbillb turtles. These turtles play pivotal roles in the local marine ecosystem. Nonetheless, these are endangered species and are facing various threats. As a non-profit conservation center, the sanctuary's main purpose is primarily on turtle conservation.

During the visit, participants had an opportunity to explore turtle eggs and baby turtles. They were also provided with wealth of information about the turtles, specifically about their life-cycle, threats to their population, the history of the sanctuary including their achievements in animal conservation efforts.

The CSR programme focused on the environment, community and education, which targeted the important aspect of environment conservation and the turtle population. Department of Biology CFS IIUM is always committed in ensuring the continuity of the environmental eco-system and concern on the wildlife.  At the sanctuary, participants did voluntarily work by cleaning areas surrounding the ponds as well as cleaning the beach. One of the huge logs that have blocked the flow of water to the ponds was successfully removed and cleared through the voluntarily activity. This CSR activities are indirectly aim to boost efforts in increasing the rate of turtle eggs hatching in Cherating beach.  Donation drive to support the sanctuary was also launched by Biology department as part of support and contribution towards the center.

During the mangrove cruise activity, participants were provided with enormous information about the mangroves through the guided tour by En Hafiz bin Abdul Majid. En Hafiz has been working with a number of researchers and organizations through a concerted effort in mangrove preservation and research. Mangrove forests play a huge role in the wellbeing of the local ecosystem. It provides countless benefits not only to the creatures who call it home but also to the people of Cherating. Some of its most vital contributions are:

During the fireflies cruise, the participants had golden opportunity to experience the magical atmosphere of Cherating River with fireflies blinking and dancing in the night sky. The participants also learnt about the firefly population and its importance in Cherating.

"Indeed, We (God) offered the Trust to the heavens and the earth and the mountains, and they declined to bear it and feared it; but man [undertook to] bear it. Indeed, he was unjust and

It is hoped that the tiny contribution from Biology Department will indirectly give a huge impact to the nature and ultimately save the wild life.