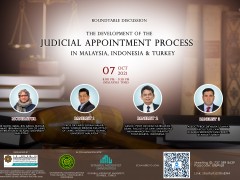 Gombak, 7 October 2021. Ahmad Ibrahim Kulliyyah of Laws organises with Universitas Muhammadiyah Yogyakarta and Istanbul Medeniyet University the Round Table Discussion on the Development of the Judicial Appointment Process in Malaysia, Indonesia and Turkey.

In Malaysia, according to Prof Farid Sufian Shuaib, the appointment process was improved in 2009 with the establishment of the Judicial Appointment Commission. In this respect, the Judicial Appointment Commission provides the list of candidates of judges to the Prime Minister who will decide which names to be given to the Yang di-Pertuan Agong after consulting the Conference of Rulers. This is certainly an improvement in the judicial appointment process.

Dr Mohd Iqbal Abdul Wahab, the moderator of the Round Table Discussion concludes that although the judicial appointment process is very important to ensure competent and independent judiciary, the people involved in the process will in the end determine whether the system works.