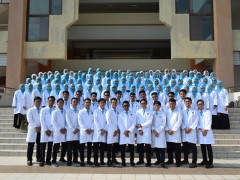 White Coat Ceremony is an event organised by Education and Professionalism Bureau of IIUM Pharmacy Students’ Society (IPhA) for the new students enrolling as first year students of Kulliyyah of Pharmacy. For this year, the White Coat Ceremony for the newest batch of students, which is also known as RX18, was conducted on 5th September 2019. A total of 114 first year students participated this annual event, in which the students took their oath and were given briefing related to Kulliyyah of Pharmacy and their course.

The event began with the singing of the national anthem ‘Negaraku’, IIUM official song, and Asma’ul Husna, then followed by the recitation of prayers by one of the students of Rx18; Muhammad Iqbal Hamidullah bin Mohd Noor. Then, the Dean of Kulliyyah of Pharmacy, Assoc. Prof. Dr. Che Suraya Hj Mohd Zin delivered the opening speech. The oath taking ceremony took place afterwards, where nine representatives of RX18 stood on stage and led by RX18 student; Izznul Adam bin Ahsanulkhaliqin. The oath taking ceremony symbolises the official beginning of the students’ journey in both Kulliyyah of Pharmacy, specifically, and in pharmacy profession, generally.

Welcome to IIUM and Kulliyyah of Pharmacy, RX18!