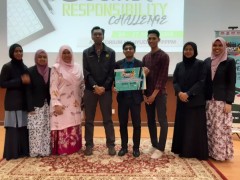 Kulliyyah of Pharmacy would like to congratulate our student, Brother Ahmad Faisal Aiman bin Che Lah (RX15) and his group, 7 One-Ther Team, which has been announced as the champion of “The Real Business Challenge Cohort II 2019” during the prize giving ceremony that was held on 19th April 2019. His group managed to win the competition out of 24 participating groups from all IIUM Campuses, including IIUM Pagoh and IIUM Gombak Campus.

Added to that, he brought along another victory after his group (representing IIUM Kuantan) has been crowned as the 2nd Runner Up for “The Student Social Responsibility Challenge” that was held recently on 25th-28th April 2019 at Universiti Malaysia Terengganu (UMT).