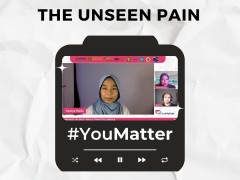 “It is a disorder, not a decision that you made,” #youmatter: The Unseen Pain

“It is a disorder, not a decision that you made,” #youmatter: The Unseen Pain

GOMBAK, 9 July 2021: A live broadcast talk concerning students’ mental health during the lockdown and ODL learning was held yesterday (8 July) on the YouTube channel of IIUMtv with the main objective to provide a platform for them to express their emotions and to share the right way of coping.

The talk #youmatter: The Unseen Pain was held from 9 p.m until 10 p.m and was attended by 59 participants and created an engaging comment section.

Hosted by Syasya Madu, the questions had a nice flow in creating a comfortable and safe space for the featured speakers, Madam Khairiah Abd Razak, a clinical psychologist from Counselling and Career Services Centre (CCSC), and Danial Afiq, a depression survivor who is also an IIUM student, to be really open in addressing this matter.

When asked the difference between mental illness and mental health, Khairiah stated that mental health is essential and applied to everyone, as it is considered as comprehensive wellbeing including our emotion, thinking, and attitude, while mental illness is when one is not able to manage our mental health well and it is a disorder or disturbance towards our wellbeing.

She addressed the stigmatisation of the public when dealing with mental illness with instant labelling of low spirituality where it can be one of the factors. However, she stressed that it can also be afflicted because of hereditary, biological, environmental, traumatic events, etc.

Thus, she encouraged people to get a proper diagnosis before self-diagnosed on our own and one way to start with that is to utilise reliable online tests such as Depression Anxiety and Stress Scale (DASS) or students can assess the test at CCSC to be referred to a local clinic in order to get a referral letter, then have a proper clinically diagnosis at the hospital.

CCSC welcomed students to book an online counselling session, however, the service will only be available during office hours, thus after 5 p.m CCSC normally channels it directly to Befrienders or any suitable operating lines.

Danial Afiq shared his early symptoms which were isolation, denial and avoidance, thus he started to overthink and snapped until it resulted in self-harm.

He had three episodes of self-harm in 2016 before he was properly diagnosed with mental illness in 2019.

Syasya Madu mentioned how depression is the unseen pain unless people feel it themselves and it makes her wonder how Danial Afiq survived.

“I wouldn’t say that I am a survivor but I am still struggling, I’m rather surviving in this situation,” Danial Afiq replied.

He added his own four ways of coping with his conditions, which are talking to himself, but in the second person point of view, listening to a lot of music, watching comedy, and walking – even aimlessly.

According to him, these ways of coping do not require active focus, thus he can get carried away with his thoughts and distract himself.

His first diagnosis was major depressive disorder, and in 2020 he was diagnosed with a polar mood disorder.

He also added that Madam Khairiah was the person who suggested doing some healthy coping such as grounding technique, deep breathing technique, and also practice mindfulness.

Nevertheless, he stated some of the unhealthy copings that he used to practice, for instance overdosing on his medications and self-harming.

As a mental illness survivor, he mentioned some of the challenges faced, mostly coming from external factors, especially the stigma encircling his environment and his difficulty in fitting into any social circles as different circles of people have different perceptions towards mental illness that requires him to explain his mental condition.

This situation often makes him question, “If people can’t see my worth, why do I have to explain myself every time?”

When talking about his experience as a student, he believed that his experience and struggle are not far different from other students because every student has his or her own academic stress, especially during ODL learning.

However, he did not deny that the struggle as a student that was diagnosed with mental illness has become extremely challenging compared to others, particularly in losing interest in his study, to the point he started to question his decision in pursuing his chosen course.

Yet, he stressed that he has received much support from his friends, and during ODL, Discord is his number one savior in communicating with his friends.

Madam Khairiah commented on the ODL issues that the first year of it was mainly on the adjustment of the students themselves, however, when moving to the second year of online learning, it has shifted to pandemic fatigue as students have been exposed to repetitious activities and it leads to academic stress.

According to her observation, last year’s concern was majorly on anxiety, however, towards the second year, the concern is more on fatigue and a sense of helplessness that the tendency of depression is high.

She stated that for clinically diagnosed patients, constant medication and psychotherapy are vital.

Further factors such as psychological, habitual, and behaviour need to be assisted by a psychologist or counsellor.

Another helpful angle to be looked into is on spiritual well-being as the treatment should include a holistic approach.

Danial Afiq claimed that the university is doing great work in terms of more exposure to the importance of mental health; however, he also agreed that a focused light workload is better than a heavy workload that requires students to rush through and leave them with no input.

He also added on his behalf, mental illness patients do not prefer ad hoc assignment as it requires a lot of mental energy.

More motivation, support, and understanding from lecturers are really valuable to him.

Madam Khairiah concurred with his statement with a quote, “Actually CCSC, we hear you, we are with you,” then proceeded to explain CCSC’s next steps in helping the students dealing with their mental health.

She claimed that a mental health policy has been established, and they are just waiting for the right time to run with it so that students with mental illness will be facilitated, especially in relation to their struggle and academic performance.

“We are working to help the staff in having empathy,” she said as one of the efforts and she was thankful that IIUM’s Rector is really concerned when it comes to mental health issues.

She believes that everyone has mental health concerns, thus the most important thing is the way people cope and stay resilient to build a tough self-resilience for every individual.

Culturally, our people especially veterans are not open when addressing mental illness and this has caused the stigmatisation that people are afraid to seek help and reach out, Danial Afiq added.

The reason for him opening up is “mainly because I want those out there and myself to know that it’s okay not to be okay and it’s okay to be like this and the feelings that we are feeling very very valid,” as he wants people to know that they’re not alone.

His last words for last night was, “It is a disorder, not a decision that you made.” ***