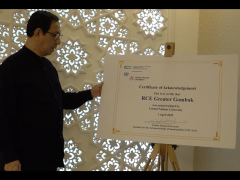 2030 TOWARD JUSTICE, DIGNITY AND EQUAL PROSPERITY

This video is the seventh of a series published by the Kulliyyah of Islamic Revealed Knowledge and Human Sciences (KIRKHS) within its project “KIRKHS Downroad to 2030: Creating Preferable Future".

In this video, Prof. Emeritus Tan Sri Dato' Dzulkifli Abdul Razak, the IIUM Rector, applauds the project “KIRKHS Download to 2030: Creating Preferable Future". He expresses promising expectations from the Kulliyyah to play a significant role in fulfilling justice, dignity and equal prosperity throughout its intellectual and humanitarian endeavours.

Recently, the outstanding accomplishments of IIUM have been acknowledged by the United Nations University in Tokyo. The International Islamic University of Malaysia is now recognized as a Regional Centre of Expertise on Education for Sustainable Development (RCE).

Tips of the Month - Study Leave for Academic Staff

Tender for Leasing of Personal Computers at Kulliyyah of Engineering, IIUM