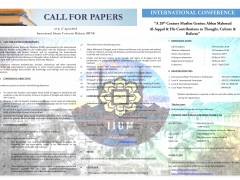 The conference aspires to achieve the following objectives

The themes of the conference can be identified at two levels as follows:

1.   The first includes the following areas :

2.   The second covers the following areas:

The conference will be held at the International Islamic University Malaysia (IIUM).

The languages of the conference will consist of Arabic and English

(DEADLINE, 21/9/2020) GRANT OPENING OF SATREPS: APPLICATIONS FOR RESEARCH PROJECTS UNDER THE TECHNICAL COOPERATION IN THE FIELD OF SCIENCE AND TECHNOLOGY BETWEEN THE GOVERNMENT OF MALAYSIA AND THE JAPANESE GOVERNMENT FOR THE FINANCIAL YEAR 2021 (SATREPS)