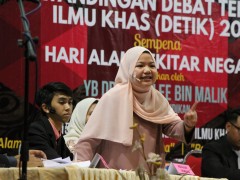 Team IIUM A emerged as the overall Champion while IIUM B reached the semifinal round of the competition. Sr. Nur Syafiqah from team IIUM A was also chosen as the Best Speaker of the Grand Final.  The details of the students are as follows:

IWON looks forward to our debaters’ future achievements in solidifying IIUM’s position as a debate powerhouse in Malaysia. Congratulations again.

PRAY TO OUR IIUM DEBATERS FOR THEIR BATTLE - BITTAUFEEQ!

DEADLINE: 1st May 2023, The 2023 Merdeka Award Grant for International Attachment

ANNOUNCEMENT ON SUBMISSION OF LTIFs TEACHING CLAIM FORM FOR SEMESTER 1, 2022/2023